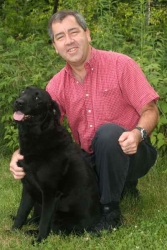 When Dr. Wheeler is not at work he enjoys playing on his computer, spending time with his spouse and two children, cooking and, of course, bonding with his 2 dogs and 5 cats. 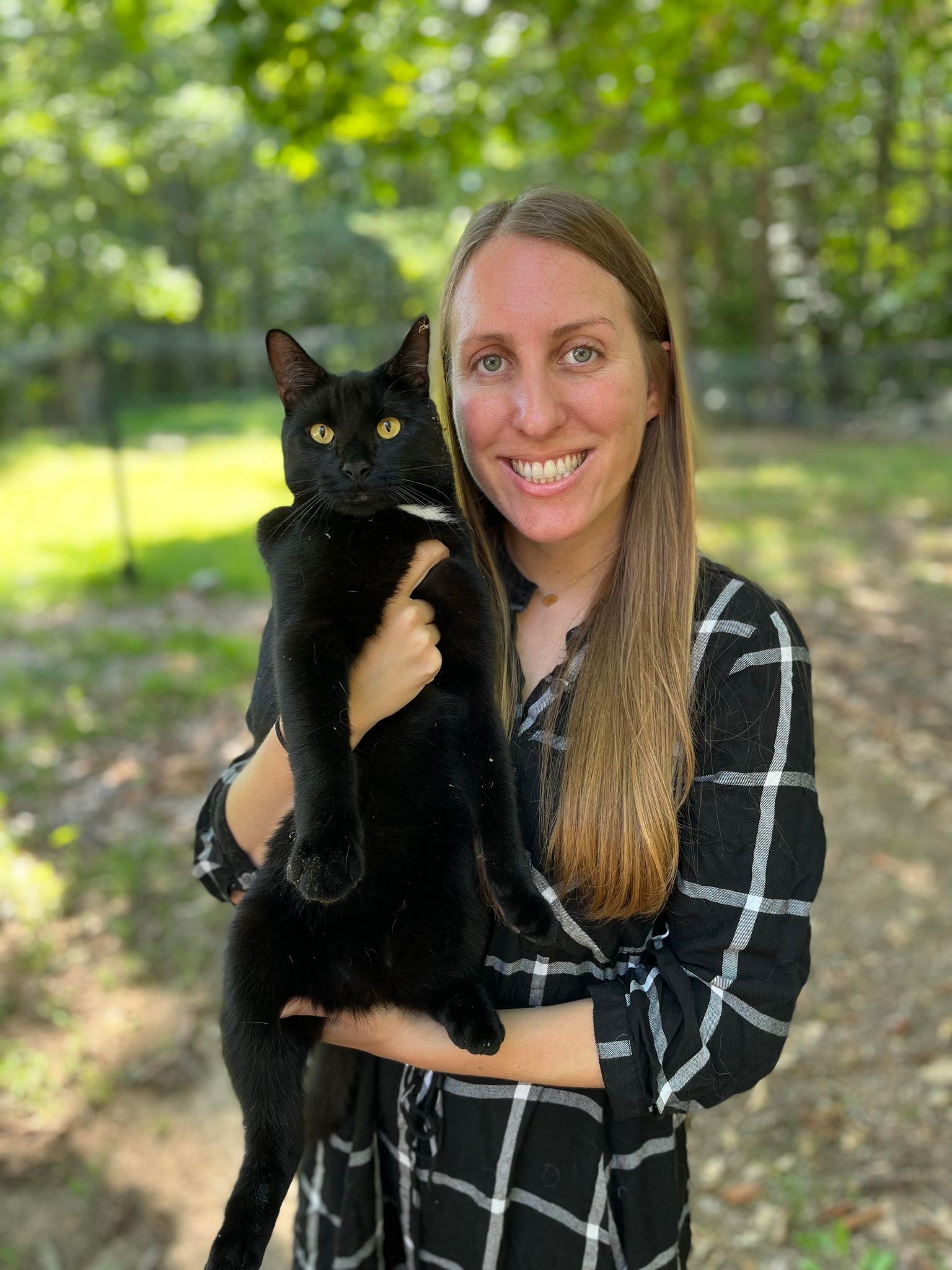 Dr. Christine Gerardi grew up on Long Island, New York where her love for animals began at a young age while volunteering at her local shelter. After graduating from James Madison University in Virginia, she completed the Doctor of Veterinary Medicine program at St. George’s University in Grenada. Since becoming a DVM, Dr. Gerardi has developed a passion for small animal medicine with a strong interest in oncology and nephrology. In her spare time she, visiting local restaurants, loves watching sports and spending time outdoors with her four adorable dogs, Guinness, Preston, Princess, and Frankie. She also has a rescue cat named Stout.

Erin started at BVH in May of 2005, she always had an interest in working with animals, but never pursued it. At least not until she moved to Maine from Connecticut and found an opportunity.

She started as one of the receptionists but as time went on she expanded her horizons by becoming a veterinary assistant and now our practice manager. Erin enjoys hiking with her husband and two children, 3 dogs, canoeing, other outdoor activities, and spending time with friends and family. 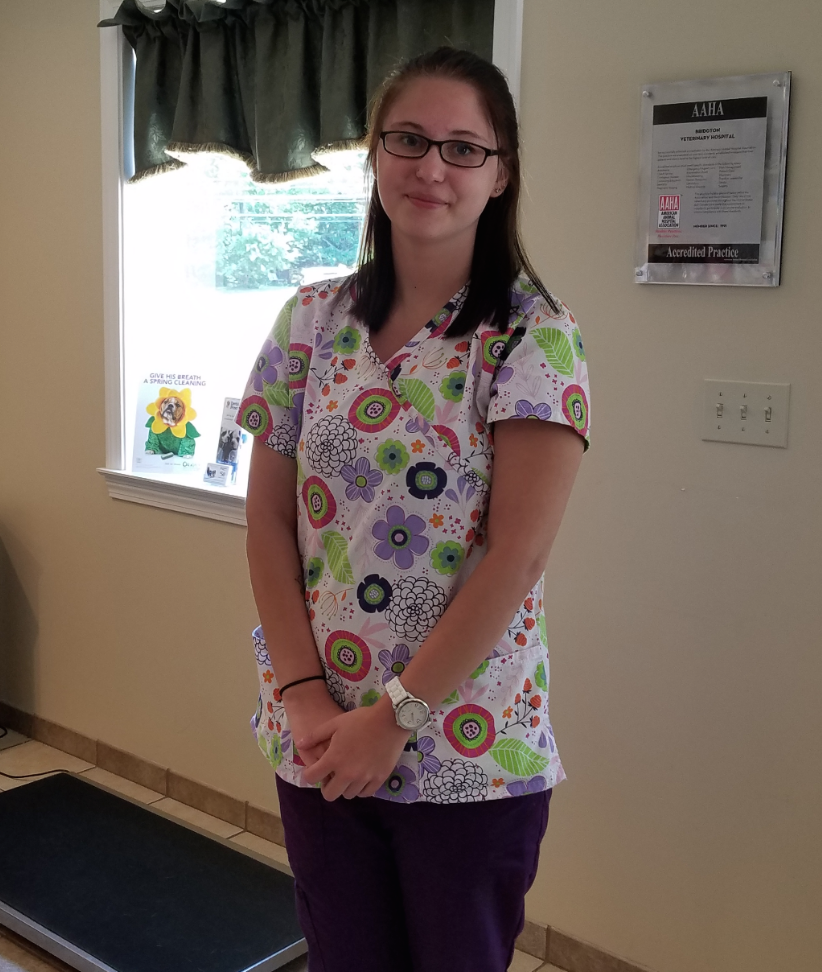 Savannah is originally from Bethel and currently resides in the Oxford Hills Area with family. She has 2 cats at home named Archie and Kenai and a dog named Rueben. She was first introduced to the BVH team during an internship while working on her degree. She graduated from the University of Maine in Augusta in May 2018 with an Associates Degree as a veterinary technician and started working with BVH shortly after in June.

She has always loved animals and knew she wanted to work with them as she got older. She loved her dog named Bear growing up, who was a Retriever/Chow mix. She remembers him swimming with her as a child and running after her and jumping into the lake off the dock.

Savannah’s hobbies include her nightly walks with Rueben, hiking, swimming and camping. 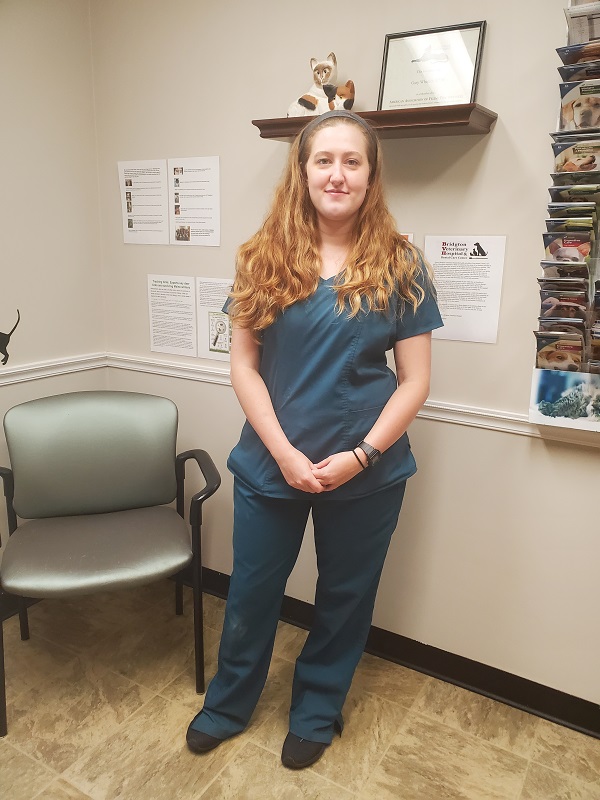 Emma joined the BVH team in May of 2021. She is from the Oxford Hill’s region, she graduated from the University of Maine Augusta with a degree in Veterinary Technology and shortly after became a Licensed Veterinary Technician in August of 2021. Emma has two cats and identifies herself as a “cat person”. She always knew that she wanted to work with animals and has an interest in animal advocacy. Her hobbies include hiking and exploring the state of Maine, board games and spending time with her animals and significant other.

Zara was a certified Nursing Assistant for four years. This year she decided to work more with animals. When Zara was younger she held various positions on her childhood farm in Massachusetts, her favorite was tending to animals. 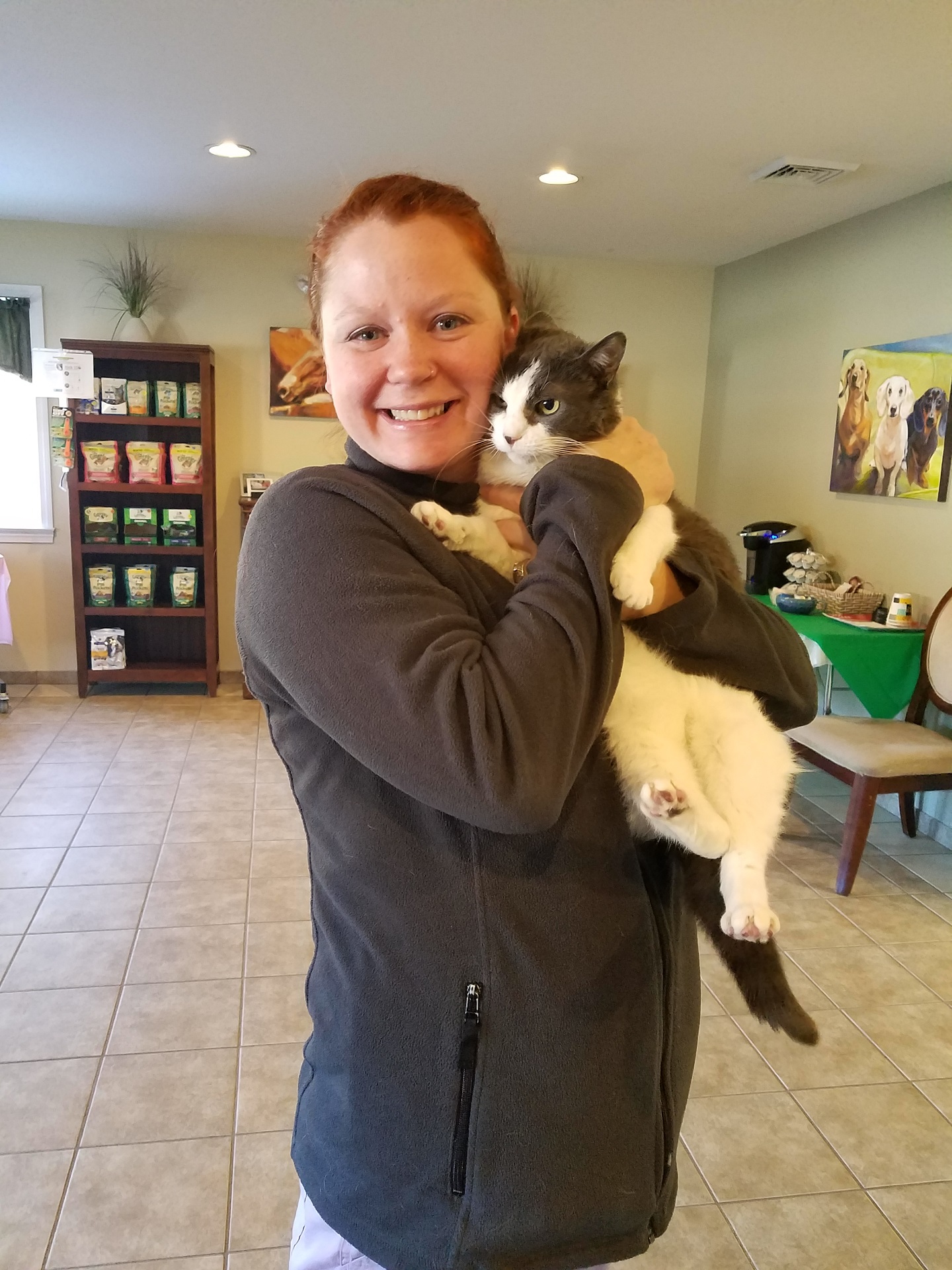 Melissa is from Seattle, Washington and moved to New England in 2009 and had earned her Associates Degree of Arts, Science and Biology at Highline College while still in WA. She has been working in the veterinary field for over 15 years.

During this time she has worked various positions from pet nurse also known as vet assistant, office manager, and as a practice manager.

Her favorite part of veterinary medicine is working on the anesthesia team which she is currently part of as a vet assistant on our surgical team, here at BVH.
She has many hobbies which include knitting, visiting different beaches in New England and exploring the area. She loved softball as a child and played up until college. She enjoys all sports and going to games for both the Celtics and Bruins.

She keeps active at home with 3 kids from age 4 to 11 years old and many beloved fur babies including 2 dogs, 4 cats, 2 guinea pigs and reptiles, a chameleon and tortoise. 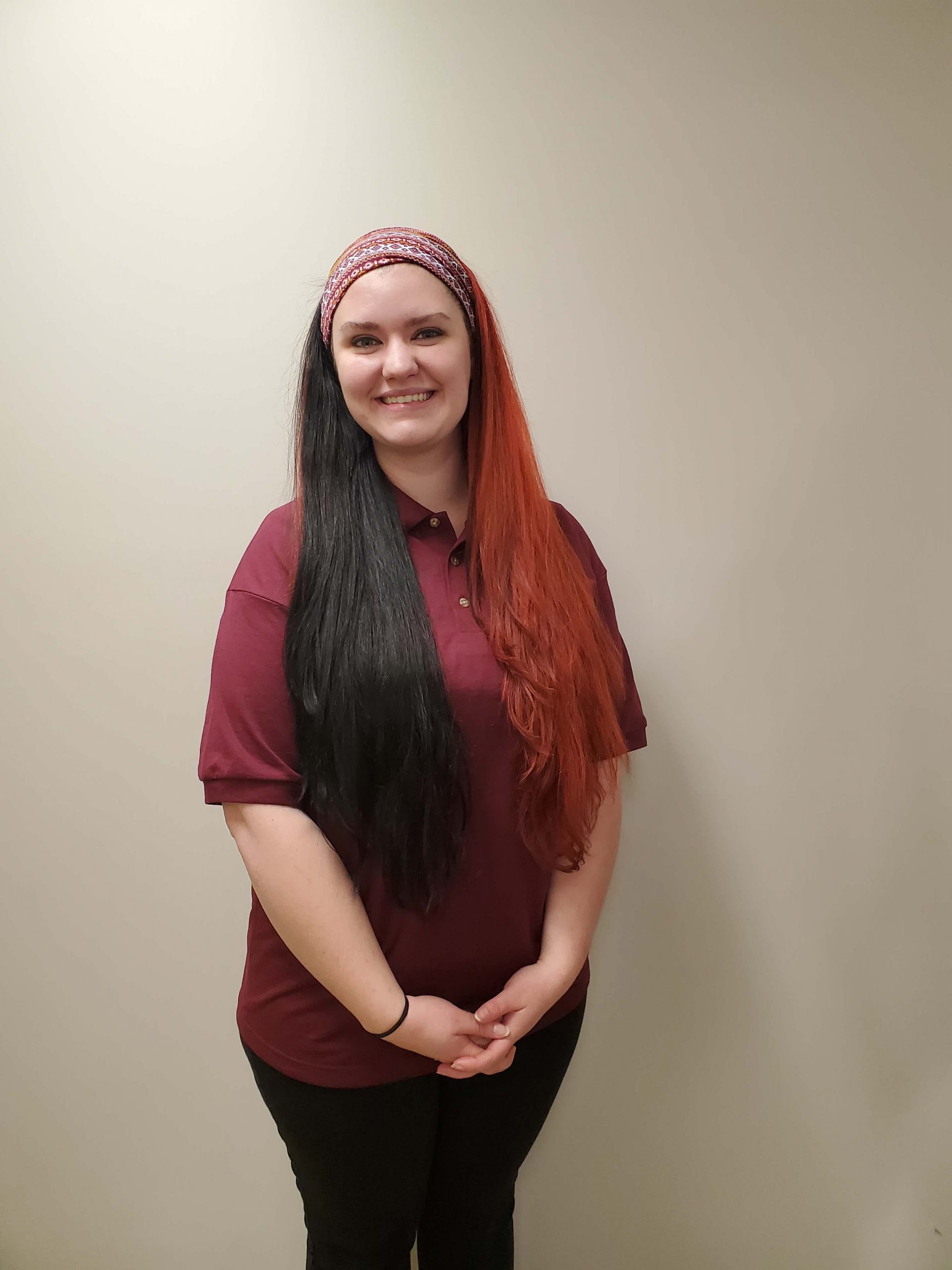 Adrienne started volunteering here at Bridgton Veterinary Hospital in 2012. She was hired shortly after volunteering to work in the kennels. She moved to Massachusetts in 2016 and was greatly missed by the BVH team. When she moved back to the area in the spring of 2019, we were thrilled to have Adrienne back. She currently works as a vet assistant. Adrienne loves all animals but has a soft spot for smaller older dogs and rabbits and is thrilled at every opportunity she gets to have in working with them at BVH. She raised rabbits for a period of time including Mini Lops and Netherland Dwarfs.

She currently has 3 animals, two dogs and a three legged cat. She spends her free time painting and drawing animal portraits and does her daily walks with her two dogs. Adrienne spends the remaining of her free time with friends and anything that gets her outside like hiking or reading a book on a sunny day. 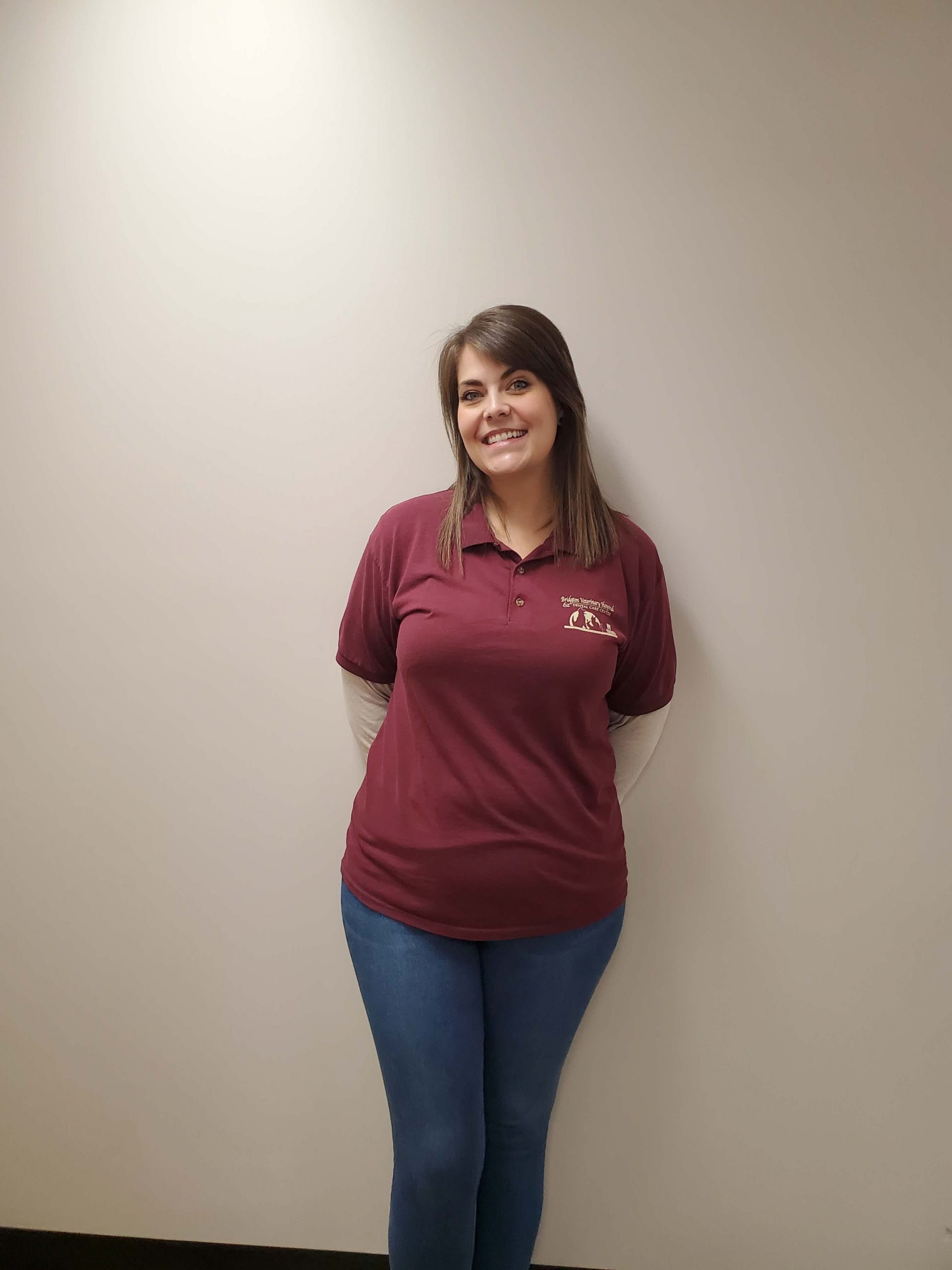 Ginny is originally from the Biddeford area and moved to the Lake Region area back in 2012, to be with her current husband. They have been married since September of 2013 and together they have two children, a son who is preschool age and a baby girl.

Her first pet is a dog named Abby, who is a mini dachshund. Abby is still a member of Ginny’s family and is now part of a pack of three dogs and currently the boss of the household.

Ginny’s hobbies include enjoying the beach on summer days, reading fiction books and going to the movies with her family. Her favorite time of the year is Christmas. She loves to decorate the house inside and out with Christmas decor each year and enjoys going with her family to pick out a tree.

Ginny’s love for animals started at a young age. She grew up always having family dogs. As a child she felt drawn to animals and has been working with animals since 2007. Her first job with animals was at a dog care day in Portland. During that time, she fell in love with one of her frequent clients, a large mastiff weighing in at 180lbs named Inu. She knew that she wanted to continue to work with animals when she moved to the Lake Region Area and found a job working at another local animal hospital. Ginny joined the BVH team in the fall of 2017. 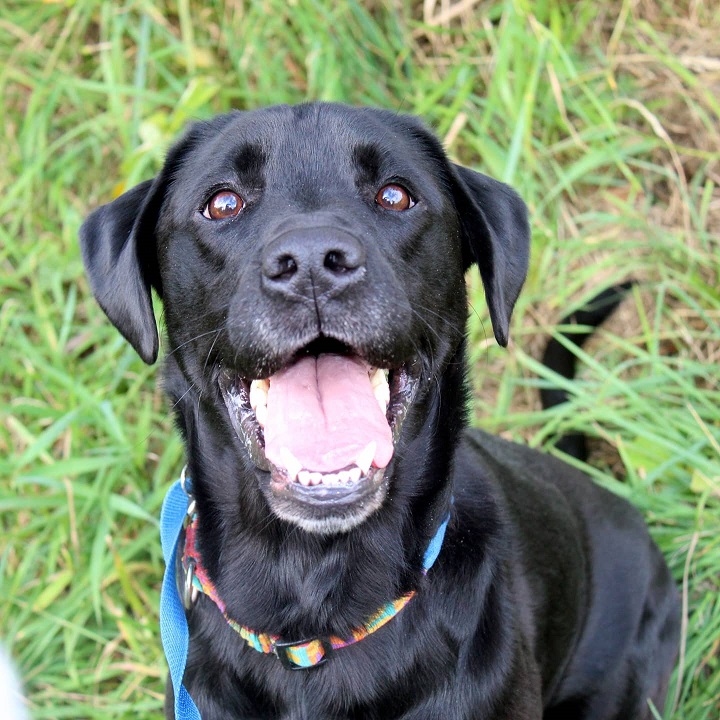 Emily started working at Bridgton Veterinary Hospital in August of 2021. She has been working in the veterinary field since 2016. She started at another facility in the kennels and at an animal shelter. It is there, she learned the rewarding experience of working with animals and the positive impact we can have on them. She takes a special interest in the more difficult animals, those who are more anxious or aggressive, and giving them a positive experience.

Emily has always wanted to work with animals. She grew up with a cow, chickens, and dogs. As a child she found herself caring for injured chickens which influenced her in the direction of becoming a vet assistant.

Leah was destined for a career in the pet care industry. When she was a young teen, she became the local pet sitter. She came to work at BVH in early 2005 as a Kennel Attendant. She has a special interest in nutrition.

Leah started Meet the Breeds in 2011, an event that promotes breed research before purchasing or adopting a dog. At the event which occurs each spring, Leah collects food and money donations for Harvest Hills Animal Shelter. She has continued it annually and is always expanding and raising awareness of animal welfare organizations in our area. Showing her complete dedication to her four-legged friends. Leah has 3 dogs, 3 horses, and one cat. 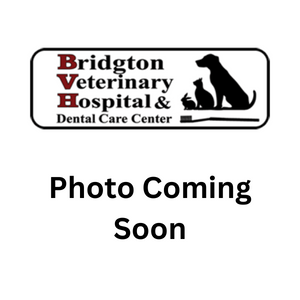 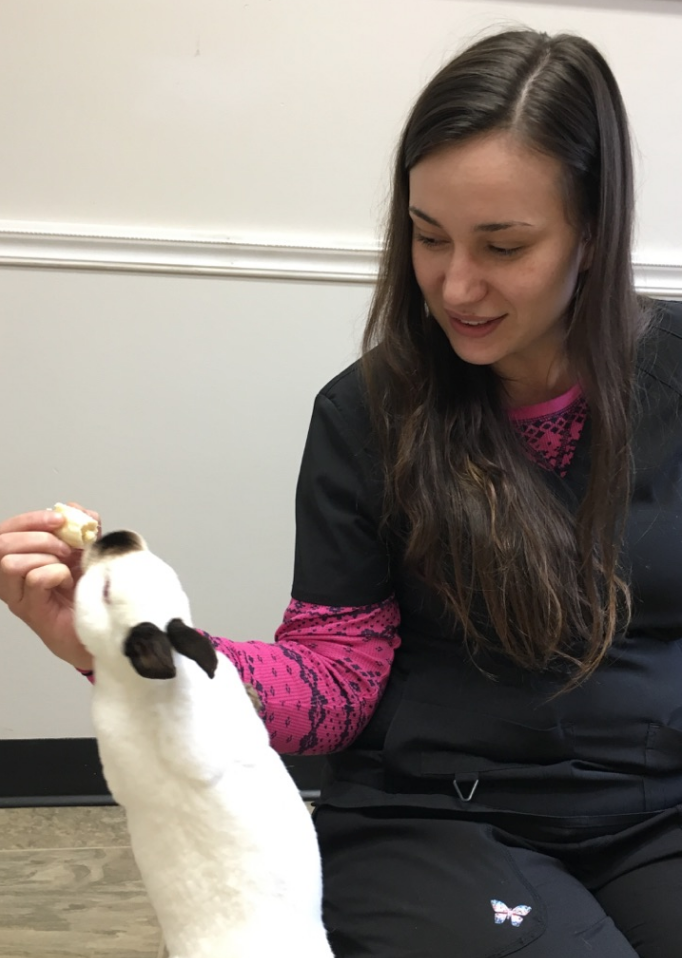 I joined the BVH team in the spring of 2017 and I am from Bridgton and currently reside in the Oxford Hills Region. I live with my daughter and two animals, a dog named Henry and cat named Soni.

I have always had a love for animals and growing up, I was grateful to have many family pets including a range of small animals brought home by my sister. I also grew up living next to, two farms on a dead end road which introduced me to farm animals including a horse and pony, sheep and chickens.

My hobbies include; gardening, hiking and spending time with the family. 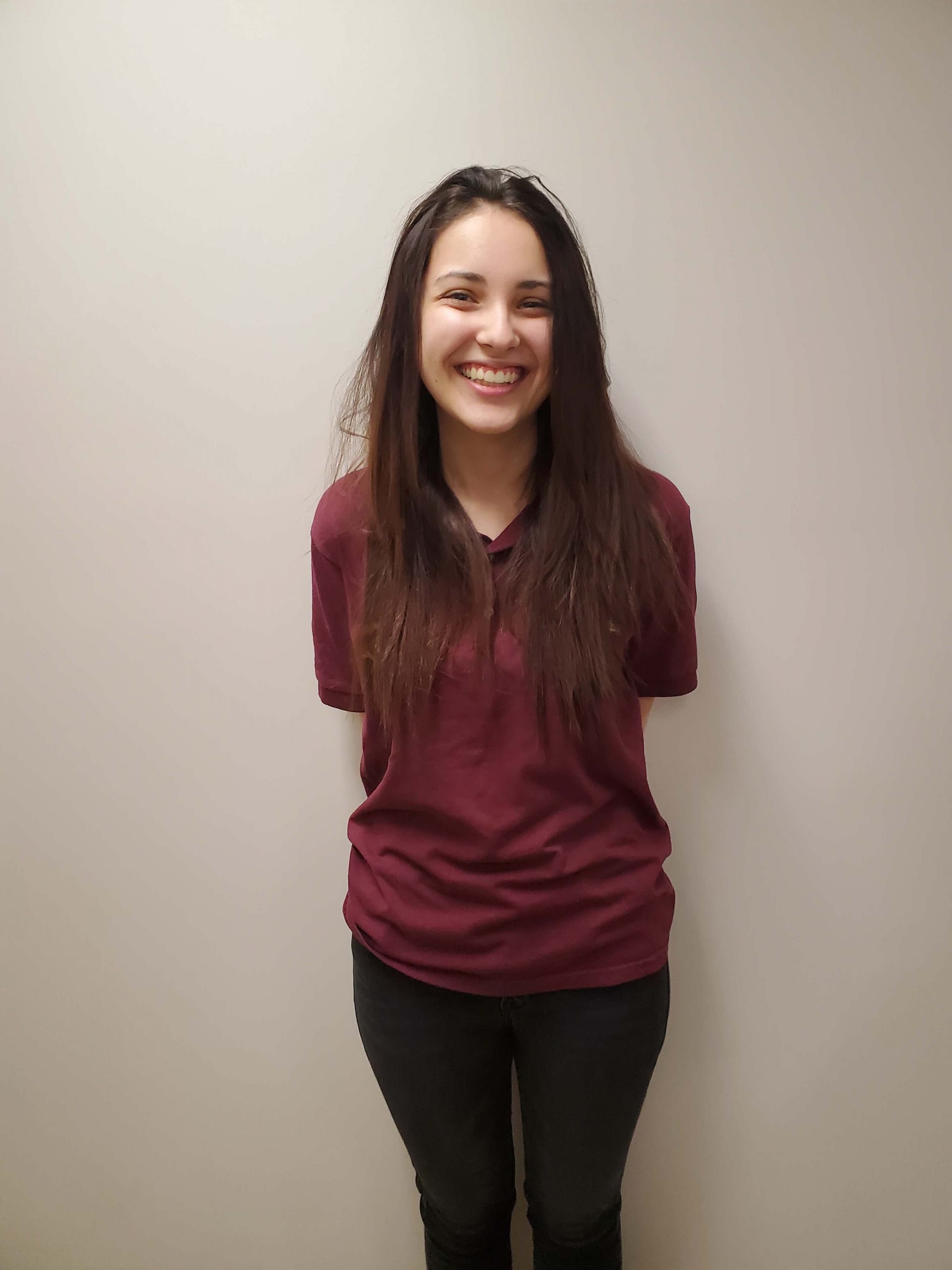 Ashlie started working here immediately after graduating High School in the summer of 2018, as a part-time seasonal kennel attendant. She then came back in July in 2019 and started working as a full-time kennel attendant. She has always known she wanted to work with animals. Her favorite part about her job is the opportunity to give affection to both the cats and dogs that come and stay with us for boarding.

Her hobbies include spending time with her own animals; chickens, guinea pigs (5 total), her dog, Tater Tot, and her two cats, Jeffrey and Ivy. When she is not with her animals you can find Ashlie on her Xbox playing Red Dead Redemption or Minecraft or out on a hike on one of the local trails.

Ashley joined the BVH team in 2016 as a kennel attendant. Her favorite part about the job is taking care of our clients’ animals while they are away. She finds so much joy in making pets feel safe and loved during their stay with us. She works hard to make pets feel like they have a home away from home.

She has two cats at home but describes herself as an animal person extending to big and small animals of any kind. Her hobbies include drawing, painting and anything artistic. She also enjoys camping in the area at local sites from time to time.

Danica has always had a passion for animals all her life. She was a veterinary technician on the east coast of Florida for over 10 years. She has recently moved to Maine and not only calls this her new home but her paradise. Danica joined the BVH team in the summer of 2022. When not at work Danica enjoys adventuring and making memories with her daughter, along with snuggling all her rescue animals. Danica has quite a full house with a toddler, 3 dogs and 2 cats.

Accessibility by WAH
Call Us Text Us